In an earlier blog I offered up the ABC's of "House Concerts" - a popular way for artists to connect with their audience in an informal and intimate setting. One of the most avid supporters of House Concerts is singer/songwriter Kelly McGuire.

Although Kelly is widely known as a Texas troubadour, his story actually begins in Missouri. A self described "shy and inhibited" guy, he grew up with a guitar playing dad who taught him his first chords. Kelly also played accordion and clarinet as a kid, but his first real taste of the spotlight came in the early 70's, when he sang The Drifters' "This Magic Moment" in the cafeteria his junior year of High School, surprising classmates who didn't know he could sing. A leading role in the Senior Spring musical (as King Arthur in Camelot), then a stint in a friend's band followed until, finally, Kelly landed a gig that would last almost fifteen years - playing solo for a pizza chain called Shot Gun Sam's, with locations in Missouri, Oklahoma, and Texas. It was during one of those five night a week performances that Kelly decided to make the Lone Star state his home, moving to Dallas in 1979.

While playing in Houston- this time at a rib place named Tony Roma's - Kelly drove drove through the Clear Lake Area on the Coast, known as the "Yachting Capitol of Texas". As Kelly puts it, "I drove back to Dallas, packed my bags and moved!" Already an avid sailor, he bought a live-aboard boat, landed a job as a yacht broker and sailing instructor, and moved there full time. Eventually, the grind of playing other peoples' songs 4-5 nights a week started to weight on Kelly and, in the early 90's, he put down his guitar for a year. He only decided to pick it back up after deciding he was going to write his own material - the first of which became the songs on his debut cd, Redfish Island, in 2000. Club Blonde followed in 2002, then - what many consider his signature cd, Boat In Belize (which won the Texas Music Award's Album of the Year), six years later. This year, McGuire released his fifth cd (a live album came out in 2009), King of The Island. Along the way, Kelly also spent time as a jingle writer, and has won numerous other awards, including "Indie Entertainer of the Year" from the Country Music Association of Texas.

After almost 30 years of playing - over 20 of those in bars and nightclubs - McGuire and his band now spend about half of their time playing corporate events and private parties and the rest perfoming at House Concerts around the country. I had a chance to speak to Kelly just before he travelled to Atlanta, Georgia for his first House Concert there.


Let's talk about House Concerts first, Kelly. You do alot of them. What is it you like so much about them?

"Corporate events are great - and we're happy to do them. They want cover songs, but they pay us well to do that. Bars were a great learning experience for me, and I made my living there for a LONG time. But, they're also meant for cover songs and often you're basically background noise. They're not set up, for the most part, to be a great listening environment. Once you start writing and performing your own material, you want people to hear your songs, your lyrics, and a House Concert is the best place for that. They are meant to be a place where people can come listen to an artist perform their songs, and tell you about the stories that went in to writing them. I did my first one - In Key West during Meeting of the Minds - back in 2002. I didn't even know they existed! Right now I probably do about 30 of them a year, all over the country - sometimes just me, sometimes with my band - and sometimes with other artists, guys like Mark Mulligan and Gary Seiler. "


The term 'House Concert' can be a misnomer, because they're not all held in someone's house. Tell em about some of the more interesting "House Concerts" you've played.

"Oh yeah, a House Concert can be held just about anywhere, as long as the environment is right. The biggest was one we did for about three years in Arizona. It was outside of a barn - up on a trailer that would be decorated with hay bales and things. There would be 150 people there, sitting on blankets and chairs. It was great. Another one, in San Diego, had 100 people. But, it's not about the numbers. Most House Concerts are between 30-60 people. And I enjoy that as much as playing for 3000, maybe even more. Because those 30-60 people are there to LISTEN to my songs."


What can people expect to hear from you at a House Concert?

"It really depends on the place. Each House Concert is unique and different. You can come see me at five different places and you'll never see the same show twice. I don't have a set list - haven't in fifteen years. And I keep adding new material, so there are always new songs to play. I can remember when I didn't have thirty minutes of original songs to play, let alone two hours! Plus, the audiences at each one are different, what we TALK about is different. Usually, I tell folks about the stories behind the songs. But, at a recent one, the audience wanted to talk about the music business. So, we did.   "


How do you feel about the term "Trop Rock"?

Well, I appreciate it because it's describes that particular niche - right away you know what you're talking about. There are going to be songs about boats and beaches, and I do alot of that material. It's where I started, writing about what I knew living on the water. But, I write songs about alot of subjects. Some of my songs are country, some more folk, reggae, rock. My main influence, like so many people like me, was Jimmy Buffett, no doubt. But, also the songwriters and groups I was listening to in the 70's - the Eagles, Jim Croce, James Taylor. Lots of people. I look at it like this: we are the legacy of Jimmy Buffett. To most of us, he was (is) a huge hero. You can only write so many songs about tiki bars and getting drunk, though, so you have to expand out. . 'Boat in Belize' was thematic. I had more songs for that album but they didn't fit with the material. So, I saved them for the new album, which has a variety of stuff on it and, so far, people seem to really like. I consider myself a songwriter who does some Trop Rock."


I don't want to go into the stories behind your songs - although there are alot of great ones I'd personally like to know about (like "Great Bicycle Disaster"). I'll leave those stories for people to hear when they attend a House Concert with you. But, I do want to ask about your songwriting process.

"It's kinda like fishing. You throw your line out and nothing happens, sometimes for a long time. Then, one day, you throw your line out and WHAM! That was the day for that song. One of my newest songs, "Woman Behind The Wheel", I had the title and the idea for seven years. One day, I was going through my notes and it just happened. When they're ready to be written, they come out. Like fishing, you have to be patient." 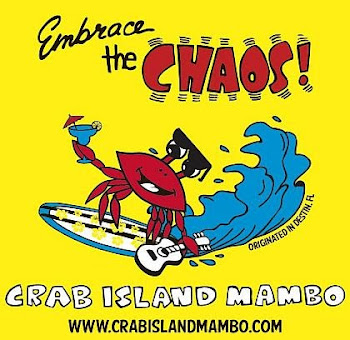